The Sorrento Surf Life Saving Club operates patrols on weekends and public holidays from the end of November through to Easter. The club patrols Saturday afternoons and all day Sunday and Public holidays.  Professional Life Guards patrol the beach on weekdays (10am-6pm) during the peak season.

To become a Lifesaver you need to be 15 years of age or higher and complete your Bronze examination.  Each year Sorrento SLSC conducts a training program which culminates in formal assessment. The training is a combination of theory and practical work on: Surf Awareness, Emergency Care, Basic First Aid, Resuscitation, Radio Operations & Comms., Surf Skills, Surf Rescue Skills & Patrol Operations. 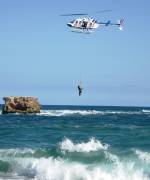 The SRC is the very first stage of becoming a lifesaver. For U/13 - U/14's who participate in the Surf Lifesaving Competitions the SRC is a compulsory requirement, along with minimum patrol hours to compete at Local & State Competitions/Carnivals.

The SRC award is also a pathway to achieving a Certificate II in Public Safety (Aquatic Rescue) Bronze Medallion in their Cadet year once turning 15 years.

Prerequisites include being able to swim 200m within 5 minutes (time to be signed by SLS qualified coach, SLS Trainer &/or Assessor) and be a minimum 13 years of age at time of final assessment.